The Fitbit flex is your activity and sleep wristband that you can pair with your iOS or Android smartphone. We have produced a number of short fitbit flex tutorial videos that help you get started with your new device.

is pretty easy. We will do the steps for getting setup using our smartphone.

In the box we got the flex, different sized wriststrap, USB dongle and charging cable. We’ll start by charging our fitbit flex by connecting our flex to the charging cable.

In the meantime, we can go and download the free fitbit app to our smartphone. Once we are ready, we can remove the fitbit flex from the carging cable and re-insert into the wriststrap.

From here, we can go to our smartphone and open up the fitibt app (make sure you have your bluetooth turned on)

Once logged in and enabled the notifications, we’ll go to the ACCOUNT tab within the app and TAP SETUP A DEVICE under your profile avatar.

We choose our flex from the list of devices. As the intro wizard steps through we are almost ready to pair our device to our phone. This process should not require a pair code.

TAP your device once you start feeling a vibration, this is the indication that your smartphone found the flex.

The last few steps is mostly a review of your daily goal and once the initial sync is done (this includes any software updates) you are ready to use your Fitbit flex!

Your Fitbit flex generally can hold a charge for about 5 days before you need to recharge it. We’ll quickly show you how to charge your fitbit flex.

Grab your charging cable and plug it into a USB port.

Now grab your fitbit flex and remove the tracker from the wristband. The wristband is flexible so the tracker, about the size of a big pill, will pop out.

Now place the tracker into the tracker, there’s only one way for it to snap in, so be gentle. Basically the rounded edge of the tracker goes in first.

Now you can see that each LED light represents 20% of battery life. Once the flex reaches 5 LED lights (after 3 hours), your device is fully charged.

What Do The LED Light Patterns Mean?

The fitbit flex has a number of light patterns, using the 5 LED lights to indicate a number of features or information while using the tracker.

We will take a quick look at what they mean.

Goal Tracking: To see where you are with your daily goal, just double tap the fitbit flex and each LED light will represent 20% of your goal.

Sleep Mode: to put your flex into sleep mode, start tapping above the LED display. You will see 2 LED lights at each end of the display. To remove from sleep mode tap again the same way until all 5 LED lights up.

Charging: Same deal as your daily goal, each LED when plugged into your charger represents 20% of the charge.

Firmware updates: If it happens during a sync that a software update is installing, you will see the LED lights scroll side to side.

Alarms: finally, when you have a silent alarm go off, the center LED will light up.

How To Restart or Reset

It may happen that your fitbit flex isn’t tracking, or responding normally or lights stay on and you need to reset or restart the device. This video shows you how.

1. Put your tracker portion of the fitbit flex into the charging cable and plug it into the USB port.

2. Take a paperclip, flip the charger upside down so that you can see the pin hole towards the cable side of the charging cable.

3. gently press the paperclip into the hole and hold for 3-5 seconds, then release.

The fitbit flex will restart and you will see a short LED light show.

Note that your tracking data isn’t erased when doing this.

If you wear your fitbit flex to bed, you can enable sleep mode on the device instead of entering a sleep log on fitbit.com or via the smartphone app.

To enable sleep mode, simply start tapping above the LED display until the device vibrates and 2 LED lights are lit at each side of the display.

To disable sleep mode, or when you are awake, repeat the tapping until all 5 LED lights are lit and the unit vibrates again.

How To Update Device Using iPhone

So how do you update the firmware (software) on your fitbit flex anyway? Well, if you are using your smartphone, the process is within the sync portion with the fitbit app.

To get started, you need to be in range of your smartphone, have about 10 minutes to spare and have your fitbit charged above 50%.

When you open up your fitbit smartphone app, you might see a notification that an update is available. TAP on the message to start the update process.

The lights on your fitbit flex will scroll from side to side, that means it is updating. Once the update is complete, the fitbit will sync and you are all set. The process is pretty simple and if you don’t see the update message, you are probably up to date.

Garmin Forerunner 220 – How to Start Your First Run

Garmin Vivofit and Vivofit 2 How to Tutorials

Contents You will find below a number of tutorials on[...] 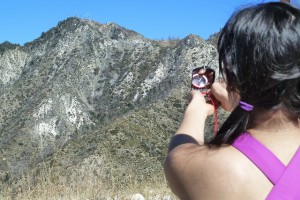 Map & Compass is a skill that needs practice to maintain[...]