It’s been almost a year since we reviewed the 2011 version of Garrison Brewing’s Winter Warmer.

I’ve been told in October, that the 2012 version got tweaked very little, less spice but just as much “hubba bubba” gum flavour. Jocelyn detected a bit of banana this year and overall we found it less harsh.

As of December 20 2012 – The Winter Warmer is out at the Brew store, so some select NSLC location might still have it, act quick!

This strong dark amber beer is brewed with spices evocative of the holiday season. Its warming character makes it a great accompaniment on cold winter nights.

Complex and inviting aromatics of strawberry jam, cinnamon, clove, brown sugar and molasses. Rich caramel avors dominate and persist through a warming nish; starts sweet with a touch of dryness followed by a smooth aftertaste of caramel and clove.

A great compliment to rich and meaty dishes.

This time around I check out Garrison Brewing’s seasonal Winter Warmer that came out recently.

It is a strong beer coming in at 7.0% and is flavored with cloves, cinnamon and demerara sugar. It is brown in color and pours with a thin head that dissipates quickly. In the aroma is sweetness and and cloves. It the taste you get some spiciness in the beginning and to me the aftertaste is molasses. The Winter Warmer itself has a medium body and a light carbonation. It is a very nice drinking beer at any time and to me more sweet than the taste of cloves and cinnamon. Enjoy responsibly 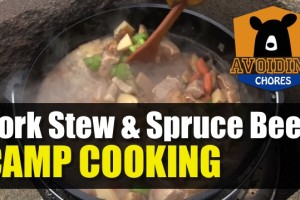 Time to get busy and use our cast iron dutch[...]