Cape Split is one of the most spectacular hikes in Atlantic Canada, taking you to one of Nova Scotia’s most famous rock formations.

There are two trails that lead to end, on the left is is a coastal trail along the bottom of the cliffs, which is NOT recommended. The trail on the right is fairly easy but is somewhat long, around 16 km return.

Parts of the property were recently sold to the provincial government and they have now named the area a Provincial Park Reserve.

This is a fairly easy hike for most people, with the only real difficulty being the length. The first part climbs steadily from sea level to an altitude of approximately 110 metres (360 ft) at its highest point. The trail then mostly levels off until you get to the meadow at the very tip.

Make sure you stay on the trail as some of the cliffs are actively eroding. Dogs should be kept on a leash.

What About The Spring?

The hike to Cape Split Nova Scotia is one on the most beautiful day hikes in the province. This was the first time I went is the spring and the flowers were spectacular. This Provincial Park Reserve juts its rugged cliffs into the Bay of Fundy and is accessible year-round

Travel, food and wine are 3 of my passions. Join me in exploring them, both within my home province of Nova Scotia, and anywhere my travels takes me. 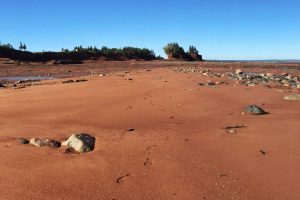 WARNING- Be aware of the tide schedule We took advantage[...]