In this video, I’ll show you a common situation where we are hiking a new trail and the map doesn’t have it. However, if the map product uses OpenStreetMap (OSM), then we can submit a trace from our track file to the map set and eventually on the next refresh the trail will be added to the map.

Garmin TopoActive maps uses OSM along with many other mapping application for desktop or smartphones like Gaia gps, trailforks and all trails. By using OSM maps into their products, this means that the maps will get refreshed more often than previously.

The benefit of using OSM maps is that being open source, anybody can submit changes. Depending on your area you might have a group of mappers who continuously update your area by uploading open data files from local government or by regular people using their GPS devices.

Here I’m using a Garmin Montana 700 GPS device and I’ve recorded a track or activity. I’ve sync with Garmin Explore and shared the track to Gaia GPS on my smartphone where I added photos along the hike. However, I just need to export the GPX track and import it into OSM.

Step 2 – Upload In OSM And Trace Over

Once the GPX file has been processed, you can EDIT the track via the in-browser editor. You should now see your GPS track layered on top of the map set and now you can use it as a base to trace new features such as a line or snap a new trail segment to an existing line. You can properly describe the new change and categorize the trace with the proper meta data.

Once you’ve saved the new map feature, it will take a few hours for it to show in read-only view in OSM and eventually it will make it’s way to the various map products that uses it like Garmin, inReach, Gaia GPS and others. 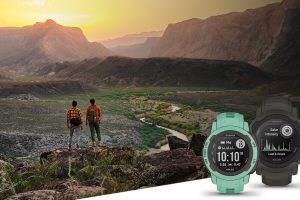 Garmin published an update to the Instinct 2 series and[...]