I finally got time and the weather cooperated that I decided to drive up to Kejimkujik National Park in Nova Scotia to do some paddling. My timing was apt as there was a learn to paddle weekend going on, so lots of people out of the water.

If you remember, I had bought used an Ocean Kayak Malibu Two tandem kayak, but I decided to out solo. I had purchased a number of items to modify the kayak but I didn’t install any of them as I wasn’t sure how I would use it.

Well, now I can tell you that while you can fit 2 people on it, I will use this solo and have plenty of room for my hiking/camping gear gear.

Also I found that the seat buckles is better suited for a single person anyway. So there’s not much point trying to rig this for more than a passenger.

My trip was almost 12 km starting from Merrymakedge (ie the canteen/beach) area of the park and I paddled up along the shoreline to hogs back island, where I made a B line to Luxie Cove.

My last visit, I was shown a bit of history about the site where there was a cabin on site homed by a retired teacher. At some point, she decided to carve into a large granite flat-top an accurate compass rose. Nowadays, you won’t be aware of it unless someone mentioned it. 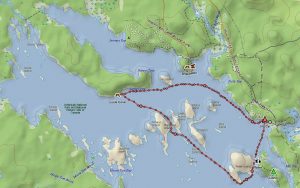 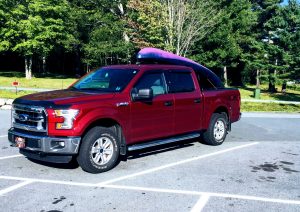 The return trip was paddling between the islands and circling around Pearle Island and crossing between Peter’s Point and the island back to the beach.

The head winds were strong, the wakes came over the sit on top kayak and I got wet. The wind slowed me down to about 2.5 km per hour facing the wind. Downwind, my speed was more like 6 km/h which made the trip much easier.

Once the trip was done, I had a much better idea which modifications to apply to my kayak for next time.

Kayaking adventure at #kejimkujik hauling gear. Great accessory for your #inreach is the backpack where you can velcro on your yak pretty easily #oceankayak #oldtowncanoe #aotw

This is part two of my previous post about the[...] 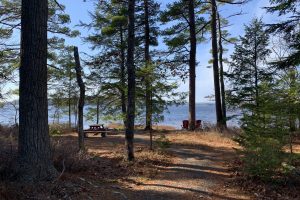 I hike along two trails within Kejimkujik National Park in[...] 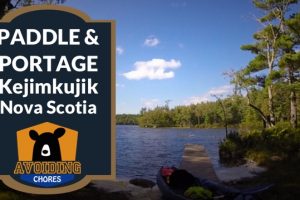 Labour Day is a busy time of year at Kejimkujik[...]