Going Up, Wayyyy Up

Quick hike with fellow you tuber dragonflyhiker along the trail in Parrsboro Nova Scotia. We grabbed a quick bite to eat at Bare Bones Bistro in Parrsboro and drove out the 3km to the Ottawa House Museum. From there there are a few parking lots, to park and start to walk to the Island. The area is known for rock hounds, so time your visit at low tide.

The area was used by the Mik’maw as a junction from Amherst, from here they could cross the Minas Bay to Cape Blomindon, or down Cobequid Bay to Windsor and even as far as Halifax.

We parked just below Ottawa House on the beach and walked across to the island. We noticed the large trail sign an took a look at the elevation and some of the lookout points. Luckily there are a few rustinc benches along the way. The initial climb is a bit strenuous, where the footing might be a little tricky. But once you clear the first climb, the trail widens and it becomes a lot easier. It’s a relatively short hike up. I wouldn’t bring any pets on this trip, mainly due to the sudden drop and proximity to the cliff you will be passing by.

At the  end, we climbed the watch tower (outhouse nearby), on a clear day you can see across the Minas basin Cape Split Cape Blomindon and other sites.

Even though the island is now connected by a beach, due to the Saxby Gale storm in 1869, nearby Ottawa House was once owned at one time by Sir Charles Tupper, who was Prime Minister of Canada for a few in 1896, bought the property and made it a summer home. It later became a hotel. Previously it was a ferry station as early as 1730 between Partridge Island Saint John, and Windsor. In the later 1700’s the settlment was a target of privateers from Maine after New England planters took over from the displaced Acadians.

But what is more interesting is the earlier history when Europeans discovered the island. It is recogniazed that Samuel de Champlain arrived to the Minas Basin in 1607. Upon arriving to the island, it is said that he discovered an iron cross, covered with moss. Indicating that he was not the first European. Legend has it that Henry SInclair fled Scotland in 1397 with his riches and templar gold for the new land and “discovered” the island along with his Oak Island pit.

Find This Trail on our iOS app

Winter Camping With An Ammo Can Wood Stove 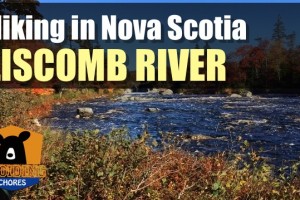 What better way than the view the fall foliage colors[...]