Drinking bottle 3101 out of 4000 of this dark amber ale brewed using the old method of putting hot stones into the wort!

Some of my tasting notes during the live hangout. Note that at 15 min into the review, my opinions started to change and were more positive. While a good easy drinking beer, the price point will probably influence negatively overall impressions of the beer. I know it had for me initially. I was expecting something more exciting at first. You can see it in the live review.

A gimmick beer? I don’t think so, Pumphouse can probably make the brew day for this an annual event as a celebration of beer making.

Aroma – When chilled, not much going on to be honest. As it warmed up, I was getting wet moss, then wet Oak; similar to oak aged barrels. Some of the caramel was also coming out but did not pick up the smokyness as advertised.

Flavour – Again, big change when the ale warms up in the glass. At some point, it tasted like any other strong ale, but eventually changed to a caramel/sweet tasting beer. Little hop at the end well balanced.

Mouthfeel – I found it highly carbonated, medium mouthfeel, smooth finish. This is a great drinking beer. It is very well balanced between the sweet and the hop side.

Overall – While the beer did get more interesting as it warmed up in the glass, served chilled this might disappoint people since it tastes like any strong ale. It might be hard to pick out some of the notes. 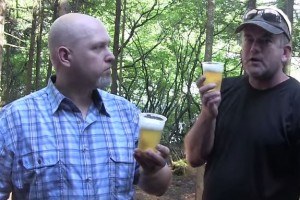 We reviewed Allagash White while out on a camping trip[...]

Started home brewing some beer to save some money. Using[...]

Started home brewing some beer to save some money. Using[...]