One item that has been on my bucket list for years was setting up a personal weather station (PWS). I finally got around in choosing a weather station. But I really didn’t figure out the full architecture of what I wanted to do with the data.

In this post, I’ll go over the high level steps I took; the roadkblocks encountered; and some lessons learned for next time.

How Do You Want To View The Data?

It is worth it to take some time and work out a high level flow and determine how you want to view the weather data. I found that makes the choice of a weather station easier. While I went for an AcuRite 01536, it was only for low cost. I then found some limitations where others brand were a bit more open. In the end, that may determine how much money you want to spend on a project like this. In my case, I spend an extra 100$ that I wasn’t expecting due to limitations at every point.

In the end, I was lucky and got the flow the way I wanted: I want to lookup my weather station using the Windy smartphone app.

As you can see from the above diagram, you have a few points where you need to make a decision going beyond the sensor display. Working your way back to fins out the options will help determine which weather station to buy.

Now that the flow has been worked out, now it’s time to take a closer look at the software and computer I used to send the data over the internet.

I zeroed in on using for software Weewx since it was an open source program, updated often and seemed to be very popular as I polled nearby weather stations and supported many of the weather services I wanted to send my data to mainly Windy and Weatherunderground.

Not all weather stations are supported, so picking the right software is key.

me, after a few hours hitting a wall

I first decided to try to get Weewx working on an older mac mini I had in the basement. Despite the documentation and overall lack of mac users. I could not get the software to recognize the AcuRite 01536 via USB.

I used a mac desktop app called UnderTheWx which was able to detect the AcuRite station and send to Weatherunderground but this wasn’t my preferred choice. but if all failed, I still had a “Plan B”.

From the weewx forums, the preferred hardware to run Weewx is to use a Raspberry Pi and a few users suggested that they were able to get things running with the AcuRite 01536 by using the 01036 model in the config file.

Luckily I was able to find a local shop that were selling a Raspberry Pi 3 B+ starter kit and proceeded to set it up and had everything running within 2 hours. Most of that time was spent updating the software.

I’ve since learned that Acuparse could be an alternative to use but it appears that this is meant more for AcuRite Atlas users.

Sending The Data To Windy

Sending the data to Weatherunderground is the most common feature you will see with the software you can install on a computer. However, I use two weather sites the most: Windy and The Weather Network.

Windy Stations allows users from the community to send weather data directly to Windy at 5 minute intervals. If you send your data to CWOP, Windy will import those stations but at much slower intervals.

As backup I also have the data sent to Weatherunderground. This is mainly because Windy won’t keep historical data past 5 days. Which is fine when I’m looking up the weather on the phone, but if I wanted to get weekly, monthly, or year to date summaries, then this is an option. I’ll eventually setup Weewx to send to a web folder on my web site.

It took a few evenings of “trail and error: but I am now able to view my weather data on my smartphone, but I did spend extra money on a Raspberry Pi to meet my needs. 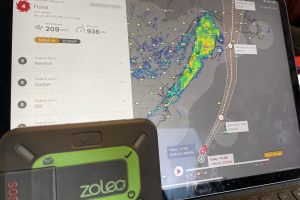