The period between 1850 – 1940 was an interesting time around Kejimkujik Lake. The area was populated with logging mills, gold mines, hunting lodges and cabins. Today when we enter the park, we don’t see this part of history right away, especially since some of these locations are in less traveled sections of the park.

Starting this fall, a new geocaching challenge will be launched that will bring park visitors to some of these locations. In order to reach all of the locations, you will need to hike, bike & paddle – a true backcountry challenge.

But someone had to setup this challenge – this is my journey across the backcountry.

The day started early at Jakes Landing, the Mersey River was slowly emptying into Kejimkujik Lake. We got on a boat and headed out to Indian Point. We approached the first location called Luxie Cove. This is a picnic area now, but back in the 1940’s a cabin once stood where the picnic table is now located. You can still see what remains of the foundation. But what is more interesting was the nearby granite boulder. On top of the boulder was a compass carved in the stone.

As we returned to Jakes, we passed Jim Charles Point. He lived in a cabin on the point during the mid 1800’s. The story goes that Jim Charles found gold in Kejimkujik. Many tried to find out where he found it, until an incident at his cabin late one night made him fled into the backcountry for a few years. The Kedgemakooge Hunting Lodge stood at the top of the point up until the mid 1900’s. Wealthy outdoorsmen would arrive at Jakes Landing and be ferried over to the point.

With the boat docked at Jakes Landing, we drove out to Farmlands trail to discover another interesting site. Irish immigrants settled at the end of this trail and cleared 20 acres, planted apple orchards and tried to farm the land. You can still see the cleared land, a few apple trees and some old roads.

We now prepared to enter the backcountry. We drove all the way down to Eel Weir and passed the gates. This used to be a public access road, but now only accessible by foot or by bike.

The first eight kilometers of the road we passed few backcountry campsites & canoe portages. What we didn’t easily see were the sites of logging mills. These were temporary operations that logged all over this southern portion of the park.

Another eight kilometers further down the road, we arrived at Mason Cabin. This is a backcountry campsite (#38 to be precise) that is available all year. The first time I heard about Kejimkujik was about the winter hike to this cabin. But in the fall, a bike ride would be much easier.

Returning from Mason Cabin, we passed Beaverskin Lake. There was a point of land where Sheldon Cabin once stood. Charles Sheldon was an American conservationist who is known as the father of Denali National Park. He chose this location as his favorite. He spent his last years at his cabin. 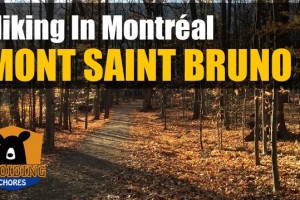 We spent 2 days paddling & portage across a series[...]