It was a matter of time until we would see how Garmin would respond to the ZOLEO Satellite Communicator. While Garmin has been very busy integrating the inReach technology into various GPS frame, there is something to be said about the simple puck design with core inputs and associated smartphone app.

The Garmin inReach Messenger Satellite Communicator along with the associated Garmin Messenger smartphone app tries to offer something a bit different than what ZOLEO users have been enjoying for the last three years.

The main feature for this version of inReach is that you can send sms messages from the devices itself (via satellite) or when paired with your smartphone using the Garmin Messenger app over cellular or wifi networks on top of the usual inReach communication, weather and SOS features you’d expect.

Garmin inReach Messenger went for a angled puck-deck of cards form factor which is similar to ZOLEO device. Function button are located on the sides of the device with a tiny display on the top. While there are no LED indicators, the inReach Messenger uses mostly the display icons and sounds for different statuses.

The small display is structured similar to other Garmin inReach devices. You press the OK button, use the Arrow keys, then press OK again based on the menu structure.

Power & SOS are located on the side of the device and the USB-C post is under a the typical soft cover you see in these type of devices.

Rather than trying to leverage the existing Garmin Explore smartphone app, users will need to download yet another smartphone in order to get the full Garmin inReach Messenger experience. The Messenger app is not compatible with other Garmin inReach devices; the idea here like the ZOLEO smartphone app is that it is a primarily a messaging app with SOS, Tracking, Weather and managing your Device and inReach subscription plan. Your tracking activities can still be viewable in Garmin Explore.

But the big feature of the app is the group chat threading feature and the ability to leverage Mapshare to let your contacts view your tracking points sent from the inReach.

The big downside though is that you are still sending SMS messages. Meaning you have 160 char length messages.

The biggest WOW factor with the Garmin inReach Messenger is the battery life. It is promising up to 28 days of usage under default settings. This is a huge leap from the 7-9 days that the current ZOLEO provides.

Now that we went over the gloss, now lets deep dive into the specs, price and subscriptions plans. So far if you’re like me, you are thinking that the Garmin inReach Messenger vs ZOLEO is fairly well matched up as iridium satellite communicators. Both use the IERCC (aka GEOS), the Garmin owned Emergency Response Coordination Center for SOS.

If you are in deep with Garmin ecosystem, the Garmin Messenger allows it to blend in with those devices if you did not want to invest in a combined inReach GPS device and the mini wasn’t doing it for you. The added flexibility of having your messages sent over wifi & cellular bridges a gap it lacked ever since the ZOLEO came out.

ZOLEO still has few points that it leads over the inReach Messenger (price, plans, overall cost of ownership), but it will need to bridge the battery gap soon and add group messaging.

The addition of the display is a feature that the ZOLEO lacks, but the form factor leads the user to clip it somewhere and use the smartphone app. Keeping the standalone functions to a mimimum (check-in, sos, power) ZOLEO remains fairly intuitive using. However, if you are using the inReach Messenger as a stand alone you have access to most of the functionality without the phone app.

In this video we’ll so a review of the Delorme[...] 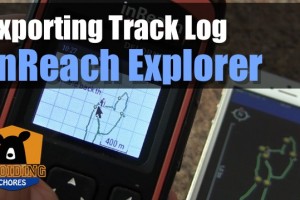 How to Export The Track Log From Your Garmin inReach Explorer

On your Delorme inReach Explorer, you have two types of[...]