If you drive by Wallace, Nova Scotia next week you will see a new park being developed. But if you look closer you will see some important past residents.

Simon Newcomb was a self-taught man who first leaned towards mathematics and astronomy. He made findings with planetary observations that allowed for better timekeeping & navigation. He published a book that gave the position of the sun at any time of day, forumulas that are still in use today.

In 1935 a plaque recognizing his achievements was placed on the site of his childhood home. Recent work by the community and local museum has increased the size of the plot around the monument and second structure will be put in place to honour another scientist.

Willard Boyle invented the CCD sensor, which is what makes it possible to take an electronic image. It is found in the Hubble telescope, labratory equipment, medical scanner, and the array of consumer devices like cameras.

July 26 2012 will be the unveiling of the park, if you are in the area of Wallace, Nova Scotia – check out the park.

Leave No Trace Canada is a national non-profit organization dedicated[...] 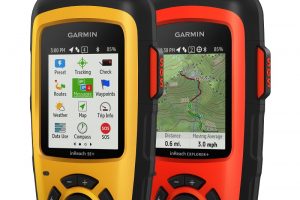 I recorded a livestream where I activated the Garmin inReach[...]

Garmin Forerunner 305 How to Delete Your Workout History

In this video we'll go over how to manage your[...]