We spent three nights at Baxter State Park, once again camping at the cabins at Daicey Pond. Since this year, we shedded a lot of dead weight this year, so we decided to attack  the nearest summit from camp – Sentinel Mountain.

We opted to park at the day-use lot at Kidney Pond, signed in and started the roughly 10k of hiking. Most of the sign-in sheet had completed the trek a little over 4 hours, so we were interested to see if we could do the same.

The start of the trail resembled a lot of the trails you’d find around Halifax Nova Scotia. Big granite boulders, moss & trees. Once we get to the first junction, we start the slow climb and elevation change.

The hiking is pretty good, not much need for hiking poles on the way up (we found that they were essential on the way down). The sun hadn’t warmed up the forest bed but we were still working up a sweat.

Pro tip: keep your devices charged & updated before you head out on the trail for a few days. #inreachlife getting set for a few days in #baxterstatepark got my waypoints & routes ready #getoutside #hiking #maine

We got to the first of 3 major elevation climbs. The first was a series of small switchbacks up & around large boulders which ended with a flattening of the trail to recoup. Each of the subsequent climbs were less difficult to climb. At some point, you’d expect the treeline to stop, but trees went all the way to the top. We were wondering just how long we’d have to go as the heat was starting to get to us.

Final packing for a few days in #baxterstatepark got some new gear to get dirty. #khule #icebreaker #salomon #ospray #tioutsiders A photo posted by Jim Cyr (@thecyr) on Sep 5, 2015 at 7:58am PDT

But then, we reached the summit and were greeted with great vistas of Doubletop, OJI, The Owl, Abol and of course Katahdin summit. We decided to do the short trail around the summit. We went off to see Sunset Ledge and had even better views.

The last nice vista was when we were facing the Golden Road and saw Horserace camping area along the river. The hike down went a little faster. We were starting to get zapped by the heat at this point. We refeuled while on the summit and gulped almost 2L of water by the time we reached the first trail junction along Kidney pond.

Cooked up a batch of chili while at camp. Added some @baxteroutdoors stowaway IPA. Expect the “making of” post & video coming to the website in a few weeks. #craftbeer #foodies #dutchoven #camping #campcooking

We signed out having completed the trail in 4h22m which wasn’t bad considering we reached the summit in 1h44m. An extended break at the top is totally worth it. 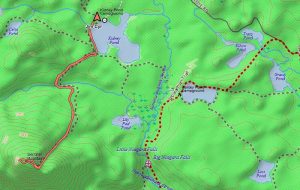