Happy New Year! Get ready for a good old fashioned Nor’ Easter Winter Storm or blizzard the first week of 2018.

Note quite what I was expecting this winter season. It’s been very cold in our region of Halifax Nova Scotia. Knowing that the jet stream will determine if we will get rain or snow for this specific storm coming up the Eastern Shore.

Satellite View Of The Storm 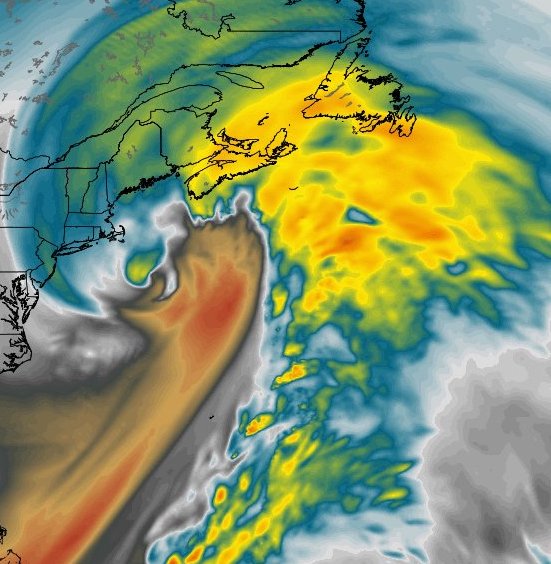 This was a classic long comma counter-wise winter storm. It was something to see when Boston was being pounded by snow, we up here in Halifax was getting rain and the whipping wind.

How strong were the winds? Well the helipad at the children’s hospital IWK recorded wind gusts of 125 km/h (77 mph) pretty much the entire evening. Around 120 thousand people across the province of Nova Scotia has no power as the temperature dropped to below freezing.

We were lucky, where we only had to deal with three hours of no power, but many had about 12-18 hours for this storm.

Waiting For The Lights To Go Out

Once the lights started the go out for 10 seconds then returning, I glared at my emergency bag and started to think what we would need first. Our power went out a bit before 5pm. Priority was getting light and to keep the four year old calm.

What We Did To Get Ready

Every situation is different, but we did a number of things to prepare for the power to go out.

One advantage of a winter nor’Easter is that it’s cold. Keeping food outside instead of spoiling in your fridge is something to think about how to approach.

We only had three hours without power. Luckily we didn’t need to deploy measures for longer durations, but as soon as the power came on, we plugged in whatever we had in case it went out again. Sometimes power utilities need to create outages in order to manage the real dangers.

How Our Emergency Bag Worked

Taking time to assemble a bag for emergency situations is smart. You can put together the basics from your extra camping gear in the basement and within an hour get whatever is missing. We’re talking about maybe 100$ investment depending how fancy you want to be.

Being able to go to the dining room table and look inside my bag for whatever we needed was worth it. I didn’t have to think. It was in the bag.

Turns out this crank radio really sucks. I need to find a better product. I also realised that I’m terrible at pacing drinking 🍺 when power is out #bombcyclone #nsstorm #nscraftbeer

What Worked, What Didn’t

Although we had a short duration, I certainly thought that my kit needed some improvement. It’s so hard to know until you get to use it what you really need.

Do not underestimate the value of having proper lighting. A combination of 12 tea lights / candles were enough to keep the three areas of the house lit and to provide some comfort. Artificial lights like the LuminAID lantern and a strong 900 lumens flashlight came in real handy. In retrospect I’m packing in more tea lights and looking at getting more LuminAID & Anker products as backups.

We charged up every battery bank, device we had until the last minute. Over the last few years, many of my devices are USB rechargeable so having enough stored was important. It’s too easy to chew up battery with your smartphone without thinking about power management.

What I really missed was having a larger battery box, like an actual car battery. I’m looking at a few products, but I want something with a deep crank and that I can recharge.

Using that smartphone for something useful. I had setup an EMO emergengy list where I can stay up to date with the latest news. Some accounts were on the ball. Others … kinda sucked.

One piece of gear that I’ve had for a few years but never got to use in a real situation was my Eton FRX1 radio. Boy was I frustrated with it. I don’t know if this was normal operation but the dynamo was 1 min of crank : 1 min of power. That’s not good. The DC port which I thought would be charging a small battery didn’t work. In short, this didn’t do the job at all. I’ll be looking at something else. The point here is that having a functioning radio is important.

We are on city water and while we didn’t think we would run out in an outage. We filled up our bathtub to operate the toilet and filled up a water cooler with 3 gallons. It could be overkill but for those on a well and not hooked up, what else could you do?

We had lots of sandwich stuff, apples, bananas, #stormchips to keep us going for an overnight. Provided that the fridge kept things cool overnight we had breakfast and could do up beans & rice. The freezer was a concern. Since temperatures would be dropping below freezing, I had a food cooler waiting to be filled once it got to the point where it needed to go outside. Lucky that we didn’t get there.

In our emergency bag, I had enough dry food to last us another 24 hours if needed.

We didn’t get there, but the plan was to simply pile on layers and get underneath wool blankets. We had a catalytic propane heater we would have used but I just don’t like using those type of devices in the house due to carbon monoxide.

Dealing with freezing water pipes, the simple fix would have been to turn on the tap to allow it to drip, or shut it all down if things dropped below 10C.

One thing we found was the tea lights we were using to light up the area, also generated a surprisingly high amount of heat. At one point I had a bunch of terracotta pots where I was going to make a heater, but it’ll have to wait until next time.

After the initial thrill of being in the dark like camping wore off, I didn’t really have anything for the little one to keep busy. Props to items like the LumiAID lantern, that became her “light” and was great seeing her help us giving up light as we roamed the house.

Luckily I remembered after a few hours that I had downloaded episodes from Netflix. Sure it would only last a few hours, but was a nice distraction before bed time.

Once the excitement of not having power wore off. Thank ✝️ i had downloaded shows on the tablet. #nsstorm